Check out our picks for children's and young adult books this season. Guaranteed to help you find your next favourite book. 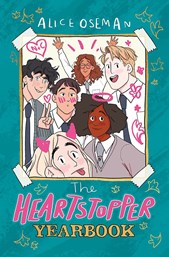 *Soon to be a live-action Netflix series!* Boy meets boy. Boys become friends. Boys fall in love. This joyful trip into the LGBTQ+ world of Heartstopper is the perfect gift for anyone who loves the graphic novels or Netflix TV series - from Alice Oseman, bestselling author and winner of the YA Book Prize. Now in full colour for the first time! Praise for Heartstopper: 'Absolutely delightful. Sweet, romantic, kind. Beautifully paced. I loved this book.' RAINBOW ROWELL, author of Carry On The full-colour Heartstopper Yearbook is packed full of exclusive content from the Heartstopper universe - including never-before-seen illustrations, an exclusive mini-comic, a look back at Alice's Heartstopper artwork over the years, character profiles, trivia, and insights into her creative process - all narrated by a cartoon version of Alice herself. By the winner of the YA Book Prize, Heartstopper is about love, friendship, loyalty and mental illness. It encompasses all the small stories of Nick and Charlie's lives that together make up something larger, which speaks to all of us. 'The queer graphic novel we wished we had at high school.' Gay Times 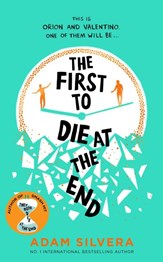 2. The first to die at the end

In this prequel to the NO. 1 INTERNATIONAL BESTSELLING phenomenon of TIKTOK fame, They Both Die at the End , two new strangers spend a life-changing day together after Death-Cast make their first fateful calls. 'If They Both Die at the End broke your heart and put it back together again, be prepared for this novel to do the same. A tender, sad, hopeful and youthful story that deserves as much love as its predecessor.' Culturefly '[A] heart-pounding story [full] of emotion and suspense.' Kirkus  'An extraordinary book with a riveting plot.' Booklist Meet Orion and Valentino.    It's the night before Death-Cast goes live, and there's one question on everyone's mind: Can Death-Cast actually predict death, or is it an elaborate hoax? Orion Pagan has waited years for someone to tell him that he's going to die, given his serious heart condition. Valentino Prince has a long and promising future ahead of him and only registered for Death-Cast after his twin sister nearly died in a car accident.   Orion and Valentino cross paths in Times Square and immediately feel a deep connection. But when the first End Day calls go out, their lives are changed for ever - one of them receives a call . . . the other doesn't.   Told with acclaimed author Adam Silvera's signature bittersweet touch, this story celebrates the lasting impact that people have on each other and proves that life is always worth living to the fullest.    PRAISE FOR ADAM SILVERA: 'There isn't a teenager alive who won't find their heart described perfectly on these pages.' Patrick Ness, author of The Knife of Never Letting Go 'Adam Silvera is a master at capturing the infinite small heartbreaks of love and loss and grief.' Nicola Yoon, author of Everything, Everything   'A phenomenal talent.' Juno Dawson, author of Clean and Wonderland 'Bold and haunting.' Lauren Oliver, author of Delirium Genius inventor Skunky has just designed a brand-new creation . . . a robot called Metal Eve! She needs to learn everything there is to know about life, so it’s probably not the best idea that she’s surrounded by Bunny, Monkey, Weenie, Pig and the gang. The only thing she’s going to learn from them is that life in the Woods is very, very silly indeed! Laughs will be aplenty in the hit comic book sensation!

Unsung stories from ancient Irish myths re-imagined for nine to twelve-year olds Have you heard of Eithne the supernatural scholar or Fand the shape-shifting eco-warrior? What about Bé Mannair, a gender-fluid spy who challenges an entire army, or Bé Binn, a giantess who gets her own back on her bullies? From mermaids and fashionistas to athletes and farmers, meet goddesses of all shapes and sizes from Ireland's ancient myths. Stand by their sides as they wield magic, fight monsters, and protect the powerless - and you might discover that you, too, are a force of nature. Note From The Author While many of us grew up learning about Greek and Norse myth, the Irish goddesses were an undiscovered secret. At my convent school, I was taught about two or three magical women from mysterious lands, but they were not described as goddesses, and I had no idea how warped these tales had become. Then years later, I took a trip to Rathcroghan, an Irish archaeological site known as the ancient capital of Connacht, and the original home of Halloween. I learned the land there was linked with powerful goddesses like Morrìgan - whose name I barely knew - and Medb, described in my schoolbooks as a greedy mortal, no more than a villain in a man's story. I couldn't understand why I hadn't been taught about these goddesses and felt something had been stolen from me. So, for many years after, I went digging through ancient Celtic texts and discovered a pantheon of exciting goddesses with brilliant abilities. But what I found most remarkable was that these women from thousands of years ago often faced the kind of challenges we experience today. Their stories are relevant and inspiring, yet girls everywhere have been stripped of the Celtic goddesses - an important part of our shared female heritage. I am grateful and honoured to retell their stories for you now. 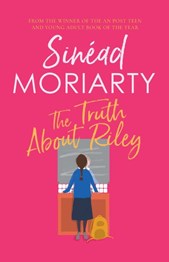 When Riley’s dad dies suddenly, leaving behind a mountain of debt, the life she’s used to starts crumbling around her.Suddenly finding herself homeless, Riley tries to keep up appearances at school, hiding the truth from her lovely but clueless friend Sophie and spiteful, suspicious Vanessa.But as strangers step up to help her and her mum, Riley realises that sometimes it is those you least expect who will change your life for the better …The Truth About Riley is the timely and thought-provoking new story for young readers from one of Ireland’s best-loved storytellers.

6. The friendship fairies go to sea

Meet the Friendship Fairies - sisters Emme, Holly and Jess. They're just like regular girls, always messing and having fun, but they're also fairies. Their mum works as a spy and she has a new case to crack - and this time she's taking the Friendship Fairies along with her, to a little island off Connemara! All the girls know is that they're going out to sea and that they need to take their swimsuits . Can Emme, Holly and Jess help their mum solve the mystery? This is the fourth book in the bestselling Friendship Fairies series by much-loved TV presenter Lucy Kennedy - magic, friendship and fun for readers aged 6+, with illustrations throughout by Phillip Cullen.   'A real balm for kids . the timeliness and kindness just ooze out of the pages' Ryan Tubridy 'TV presenter Lucy Kennedy brings her trademark sense of fun to her debut children's book' The Irish Times 'Charming' The Sunday World 'Adorable' RSVP 'An instant hit' Woman's Way 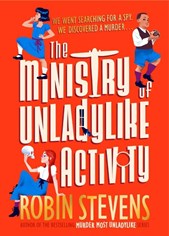 The start of a thrilling new mystery series from the number-one-bestselling, award-winning author of Murder Most Unladylike.Britain is at war, and a secret arm of the British government called the Ministry of Unladylike Activity is training up spies. And who better to become a spy than a child? A child can go places, see things and listen in on conversations in a way that no adult ever can.Enter May Wong and her friends. Trained up at the Ministry, they soon embark upon their first mission: masquerading as evacuees, they are sent to a wealthy manor house to spy on the owner, who is suspected of working for the enemy.And then the murder happens...