The Percy Jackson book series by Rick Riordan is an action-packed reinvention of ancient Greek myths for young readers aged 9+. Percy Jackson is half boy, half god - join him and his friends on a thrilling quest that seems them meeting gods, battling monsters and taking on the Titans. 1. Percy Jackson and the lightning thief

Coming soon to Disney+! Half boy. Half God. ALL Hero. I was just a normal kid, I went to school (got expelled a lot, but that wasn't my fault), played sports and hung out with my best friend. Until I accidentally vaporized my maths teacher. Now, I spend my time at Camp Half Blood, battling monsters and generally trying to stay alive. And now that Zeus thinks I've stolen his lightning bolt, staying alive is going to be even harder... WHAT TO EXPECT FROM PERCY JACKSON: · Monsters · Greek Gods · Laughs (and terrified screams) Rick Riordan has now sold an incredible 60 million copies of his books worldwide. 'This is the stuff of legends' - The Guardian 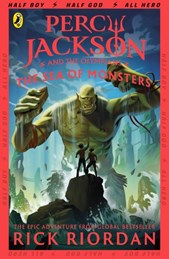 2. Percy Jackson and the sea of monsters

Coming soon to Disney+! Half boy. Half God. ALL Hero. I look like a normal kid. Only there's a difference. Poseidon, God of the Sea is my dad. Which sounds cool, but actually means there is usually someone (or something ), somewhere, trying to kill me. Now I live at Camp Half-Blood, with other kids like me. But Camp Half-Blood is a bit different to most summer camps. Instead of toasting marshmallows and singing campfire songs, we battle giant cannibals at dodgeball. This time, we're under attack, and I need to get my hands on the Golden Fleece or we'll be invaded by monsters. Big ones. WHAT TO EXPECT FROM PERCY JACKSON: · Monsters · Greek Gods · Laughs (and terrified screams) Rick Riordan has now sold an incredible 60 million copies of his books worldwide. 'This is the stuff of legends' - The Guardian 3. Percy Jackson and the Titan's curse

Coming soon to Disney+! Half boy. Half God. ALL Hero. My life could have been the same as an ordinary teenager. Except my dad is Poseidon, and I live in a camp full of half Gods and mythical creatures. So instead, my days are spent combatting half-lion half-humans and trying to live a somewhat normal life. But normalcy has just gone out the window. My friend Annabeth is missing, a Goddess is in chains, and only five of us can join the quest to save the day. Oh and guess what. The Oracle has predicted that not all of us will survive... WHAT TO EXPECT FROM PERCY JACKSON: · Monsters · Greek Gods · Laughs (and terrified screams) Rick Riordan has now sold an incredible 60 million copies of his books worldwide. 'This is the stuff of legends' - The Guardian 4. Percy Jackson and the battle of the labyrinth

Coming soon to Disney+! Half boy. Half God. ALL Hero. Being the son of a Greek God, nothing in my life has been straightforward. Or monster-free. And it looks like that's not going to change anytime soon now that my arch enemy Luke wants to invade Camp Half-Blood via an ancient labyrinth. If he succeeds, thousands of bloodthirsty monsters will attack. So it's goodbye sunshine, hello darkness as four of us descend into the terrifying underground and beyond . . . WHAT TO EXPECT FROM PERCY JACKSON: · Monsters · Greek Gods · Laughs (and terrified screams) Rick Riordan has now sold an incredible 60 million copies of his books worldwide. 'This is the stuff of legends' - The Guardian 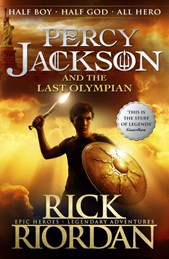 5. Percy Jackson and the last Olympian

Coming soon to Disney+! Half boy. Half God. ALL Hero. Normally when you turn sixteen you get a really cool present. But, being sixteen and the son of Poseidon can never be that simple. So instead, I get a prophecy that says the fate of the entire world on my shoulders. Great. On top of that, Kronos, Lord of the Titans, is attacking New York City and the dreaded monster Typhon is heading our way. So, it's me and forty of my demi-god friends versus untold evil. Happy birthday to me! WHAT TO EXPECT FROM PERCY JACKSON: · Monsters · Greek Gods · Laughs (and terrified screams) Rick Riordan has now sold an incredible 60 million copies of his books worldwide. 'This is the stuff of legends' - The Guardian

6. Percy Jackson and the Greek heroes

IF YOU LIKE POISONINGS, BETRAYALS, MUTILATIONS, MURDERS AND FLESH-EATING FARMYARD ANIMALS, KEEP READING . . . In this gripping follow-up to Percy Jackson and the Greek Gods , demigod Percy Jackson tells the stories of twelve of the original Greek heroes in all their gory, bloodthirsty glory. Want to know who cut off Medusa's head? Which hero was raised by a she-bear? Who tamed Pegasus, the winged horse? Percy has all the answers . . . 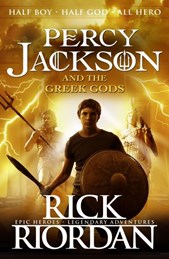 7. Percy Jackson and the Greek Gods

"If you like horror shows, bloodbaths, lying, stealing, backstabbing and cannibalism, then read on..." Who could tell the true stories of the gods and goddesses of Olympus better than modern-day demigod Percy Jackson? In this action-packed tour of Greek mythology, Percy gives his hilarious personal views on the feuds, fights and love affairs of the Olympians. Want to know how Zeus came to be top god? How many times Kronos ate one of his own kids? How Athena literally burst out of another god's head? It's all here in black and white... Featuring an exclusive bonus chapter from The Blood of Olympus , the fifth and final book in the Heroes of Olympus series! Rick Riordan has now sold an incredible 55 million copies of his books worldwide! 'Explosive' - Big Issue 'Action-packed' - Telegraph 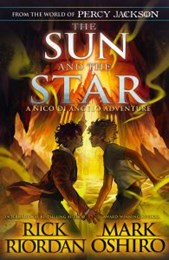 8. Sun And The Star (From The World Of Percy Jackson) TPB

As the son of Hades, Nico di Angelo has been through so much, from the premature deaths of his mother and sister, to being outed against his will, to losing his friend Jason during the trials of Apollo. But there is a ray of sunshine in his life–literally: his boyfriend, Will Solace, the son of Apollo. Together the two demigods can overcome any obstacle or foe. At least, that’s been the case so far . . . Now Nico is being plagued by a voice calling out to him from Tartarus, the lowest part of the Underworld. He thinks he knows who it is: a reformed Titan named Bob whom Percy and Annabeth had to leave behind when they escaped Hades’s realm. Nico’s dreams and Rachel Dare’s latest prophecy leave little doubt in Nico’s mind that Bob is in some kind of trouble. Nico has to go on this quest, whether Mr. D and Chiron like it or not. And of course Will insists on coming with. But can a being made of light survive in the darkest part of the world? and what does the prophecy mean that Nico will have to “leave something of equal value behind?" Nico will have to face demons both internal and external as his relationship with Will is tested to the core in this standalone adventure featuring two of the most popular characters in the Percy Jackson saga