I would love to be able to say that – like Grace Adams, my 45-year-old protagonist who’s been pushed to the brink – I abandoned my car in gridlocked traffic one day and walked away without a backwards glance. Sadly, that didn’t happen… But I thought it would be a good starting point for writing a midlife heroine: an improbable action hero, with all the dark humour and visceral emotion that would bring. Something that was a corrective to the prevailing narrative that women at this point in their lives are downtrodden and boring and over the hill – a kind of re-branding.

When we first meet her in the book, Grace is having one of the worst days of her life. But instead of breaking down, she rises up. Estranged from her husband and child, and having just lost her job, she sets out on foot across north London to try and win back her daughter at her sixteenth birthday party. It’s a party she hasn’t been invited to, but she’s going anyway – and nothing is going to stop her. Demonstrating some fierce mother love, she rips up the social contract; she says and does all the things we only dream of doing. She’s basically my fantasy self!

What started out as an idea that made me cackle gleefully at the kitchen table – because I knew it would be a cathartic write – happily, became much more than that. A far broader exploration of family and identity, language, love and womanhood, the ambush of age and female rage. Ultimately, it’s a redemptive narrative – there is hope in this book.

And it seems to have struck a chord. I’ve been stunned by the reactions from publishers and early reviewers, who’ve said that Grace’s story has made them laugh and cry, and that in reading the book they felt ‘seen’. I’m hopeful that Grace joins a new breed of midlife heroines emerging in TV and film, particularly. That these women are starting, at last, to become a part of the cultural conversation. Women who are stepping outside the spaces prescribed for them – and who could be any one of us. 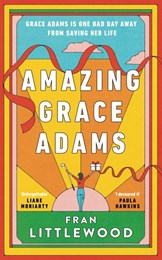