Check out our picks for children's and young adult books this season. Guaranteed to help you find your next favourite book.

There are lots of laughs at every level in Treehouse Tales: too SILLY to be told ... UNTIL NOW! From the bestselling Andy Griffiths and Terry Denton. Climb the storeys with thirteen, never-before-heard adventures starring Andy, Terry and their friends. Featuring laugh-out-loud stories such as: Terry and the Magic Wand Chair-up-your-nose Day The Day Terry Flushed Me Down the Toilet The Mystery Case of the Missing Doodles ... and many, many more! Well, what are you waiting for? Come on up! 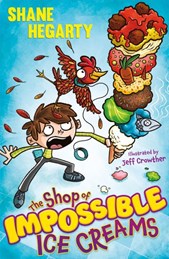 2. The shop of impossible ice creams

Welcome to the Shop of Impossible Ice Creams! Step inside to discover a delicious world of magical adventure, from bestselling author Shane Hegarty. First in a comic, heart-warming illustrated series, for 7+ fans of The Nothing to See Here Hotel and Charlie Changes into a Chicken . Limpet's mum is opening an ice-cream shop, full of her favourite new flavours: mushroom and tuna ice cream, anyone? Roast parsnip and gravy? Limpet's not sure about this. He likes a nice, safe life. His favourite ice-cream flavour is vanilla. But when wicked Mr Fluffy arrives with his Mega Emporium of Amazing and Spectacular Ice Creams, Limpet knows he's got to fight back. And there are magic ingredients on his doorstep which can solve all his worries, if only he can get the recipe just right ... Illustrated throughout with fabulous black and white illustrations by Jeff Crowther and written by the bestselling author of Boot , this story will make you fall in love with reading.

3. Breakfast Club Adventures: The beast beyond the fence

Dive into an exciting and mysterious adventure full of fun-filled friendships, fantastical creatures and incredible investigations by the #1 bestselling author Marcus Rashford! The Breakfast Club Adventures: The Beast Beyond the Fence is the first fiction book by England International footballer, child food-poverty campaigner and bestselling author Marcus Rashford MBE, inspired by Marcus's own experiences growing up! Written with Alex Falase-Koya, it is the third title in the Marcus Rashford Book Club and is packed with tons of illustrations by Marta Kissi, making it the perfect book for children aged 8-11. There's something fishy going on at school . . . When twelve-year-old Marcus kicks his favourite football over the school fence, he knows he's never getting it back. Nothing that goes over that wall ever comes back. But when Marcus gets a mysterious note inviting him to join the Breakfast Club Investigators, he is soon pulled into an exciting adventure with his new mates Stacey, Lise and Asim to solve the mystery and get his football back! Packed full of friendship, adventure, community and fun, you won't want to miss The Breakfast Club Adventures : The Beast Beyond the Fence , Marcus Rashford's first fiction book for children. 'Breakfast Club guaranteed I had the best possible start to my day and welcomed me with open arms. It wasn't just about food. It was about forming friendships, about togetherness, about escape. It was where some of my greatest memories were made. I want to capture that feeling in my debut fiction book.' - Marcus Rashford MBE Innocent by day, killer by night: a dark, twisting thriller about a teen assassin's attempt to live a normal life. 'An electrifying debut!' Chelsea Pitcher, author of This Lie Will Kill You Trained and traumatised by a secret assassin programme for minors, Isabel Ryans wants nothing more than to be a normal civilian. After running away from home, she has a new name, a new life and a new friend, Emma, and for the first time, things are looking up. But old habits die hard, and it's not long until she blows her cover, drawing the attention of the guilds - the two rival organisations who control the city of Espera. An unaffiliated killer like Isabel is either a potential asset . . . or a threat to be eliminated. Will the blood on her hands cost her everything? From Finn Longman, an exhilarating new voice in YA fiction, comes an addictive new blockbuster series for fans of global phenomena The Girl with the Dragon Tattoo , Killing Eve  and The Hunger Games . PRAISE FOR THE BUTTERFLY ASSASSIN: 'This dark, enthralling thriller is a compulsive debut' The Guardian  'A heart-in-your-mouth thriller that grips you from the first page until the very last.' Benjamin Dean, author of The King is Dead   'A bold, jagged and uncompromising thriller that will keep you guessing all the way to the end.' Tom Pollock, author of White Rabbit, Red Wolf 'Sharp and layered, with a bright beating heart. The Butterfly Assassin will lure you deep into a fascinating and dangerous new world.' Rory Power, author of Wilder Girls 'An utterly addictive story. I told myself "just one more chapter" well into the night.' Emily Suvada, author of This Mortal Coil   'Fierce, thrilling, and impossible to put down. Packed full of amazing friendships, plot twists and a desperate fight to survive' C. G. Drews, author of The Boy Who Steals Houses