A MURDER MOST UNLADYLIKE

At Deepdean School for Girls, Daisy Wells and Hazel Wong have set up their own detective agency. But they are struggling to find any real crimes to investigate. (Unless you count the case of Lavinia's missing tie. Which they don't.) Shop the whole Murder Most Unladylike Series by Robin Stevens in order: The first marvellous murder mystery in the bestselling Murder Most Unladylike series! 'Ripping good fun' The Times 'Plotting is what sets this book apart' Telegraph At Deepdean School for Girls, Daisy Wells and Hazel Wong have set up their own detective agency. But they are struggling to find any real crimes to investigate. (Unless you count the case of Lavinia's missing tie. Which they don't.) Then Hazel discovers the Science Mistress, Miss Bell, lying dead in the Gym. To add to the mystery, when she and Daisy return five minutes later, the body has disappeared. Now Hazel and Daisy not only have a murder to solve: they have to prove one happened in the first place. Determined to get to the bottom of the crime before the killer strikes again Hazel and Daisy must hunt for evidence, spy on their suspects and use all the cunning and intuition they can muster. But will they succeed? And can their friendship stand the test? 'Enormous fun' Irish Times 'A skilful blend of golden era crime novel and boarding school romp . . . Top class' Financial Times 'I absolutely loved it' Susie Day The second thrilling mystery in the bestselling Murder Most Unladylike series! 'A delight . . . The Agatha Christie-style clues are unravelled with sustained tension and the whole thing is a hoot from start to finish' Daily Mail 'A feelgood blend of Malory Towers and Cluedo . . . Stevens has upped her game in this new volume' Telegraph ----- Schoolgirl detectives Daisy Wells and Hazel Wong are at Daisy's home, Fallingford, for the holidays. Daisy's glamorous mother is throwing a tea party for Daisy's birthday, and the whole family is invited, from eccentric Aunt Saskia to dashing Uncle Felix. But it soon becomes clear that this party isn't really about Daisy at all. Naturally, Daisy is furious. Then one of their party falls seriously, mysteriously ill - and everything points to poison. With wild storms preventing anyone from leaving, or the police from arriving, Fallingford suddenly feels like a very dangerous place to be. Not a single person present is what they seem - and everyone has a secret or two. And when someone very close to Daisy looks suspicious, the Detective Society must do everything they can to reveal the truth . . . no matter the consequences. 'The second book in Robin Stevens' fabulous Wells and Wong schoolgirl detective series - think St Trinians mixed with Miss Marple. These are thrilling books for tween detectives who adore solving dastardly murders, jolly hockey sticks and iced buns for tea' Guardian

The third mystery in the bestselling Murder Most Unladylike series; just like the iconic Agatha Christie, Hazel and Daisy have boarded the Orient Express! 'A delight . . . Hazel and Daisy are aboard the Orient Express: cue spies, priceless jewels, a murder and seriously upgraded bun breaks' The Bookseller 'Addictive . . . A rumbustious reworking of Agatha Christie's Orient Express caper' New Statesma n ----- Daisy Wells and Hazel Wong are taking a holiday on the world-famous Orient Express - and it's clear that each of their fellow first-class passengers has something to hide. Even more intriguing: there is rumour of a spy in their midst. Then, during dinner, there is a scream from inside one of the cabins. When the door is broken down, a passenger is found murdered, her stunning ruby necklace gone. But the killer has vanished - as if into thin air. Daisy and Hazel are faced with their first ever locked-room mystery - and with competition from several other sleuths, who are just as determined to crack the case.

Join Daisy and Hazel on their fourth mystery in the bestselling Murder Most Unladylike series! 'Ripping good fun' The Times 'Thrilling' Guardian ----- As they return to Deepdean for a new school term, Daisy Wells and Hazel Wong are faced with some big changes. For one, there's a new Head Girl, Elizabeth Hurst, and a team of Prefects- and these bullying Big Girls are certainly not good eggs. Then, after the fireworks display on Bonfire Night, Elizabeth is found - murdered. Many girls at Deepdean had reason to hate Elizabeth, but who might have committed such foul play? Could the murder be linked to the secrets and scandals, scribbled on scraps of paper, that are suddenly appearing around the school? And with their own friendship falling to pieces, how will Daisy and Hazel solve this mystery? 'Top class' Financial Times 'A delight' Daily Mail

The fabulously festive fifth Murder Most Unladylike mystery. It's Christmas, and the snow is falling in Cambridge, where the detective duo Daisy Wells and Hazel Wong are spending the festive period. But Hazel's hopes of relaxing amongst the beautiful spires, cosy libraries and inviting tea-rooms are dashed by the danger lurking in the dark stairwells of Maudlin College. Two days before Christmas, there is a terrible accident. At least, it appears to be an accident - until the Detective Society look a little closer, and realise a murder has taken place. Faced with several irritating grown-ups and fierce competition from a rival agency, they must use all their cunning and courage to find the killer (in time for Christmas Day, of course). 'A superb puzzle . . . Splendidly seasonal' Metro 'Fabulous' The Times A collection of short stories for budding Detective Society members. Daisy and Hazel invite you to discover their untold stories . . . Daisy Wells and Hazel Wong are famous for the murder cases they have solved - but there are many other mysteries in the pages of Hazel's casebook. From the macabre Case of the Deepdean Vampire, to the baffling Case of the Blue Violet, and their very first case of all: the Case of Lavinia's Missing Tie. Just like Daisy and Hazel's cases, there's more to this book than meets the eye, including: Brilliant mini-mysteries, including two brand-new and never seen before stories Daisy and Hazel's own tips, tricks and facts This is the perfect book for Agatha Christies In Waiting and fans of the award-winning, bestselling Murder Most Unladylike series. 7. A spoonful of murder

Shortlisted in the Children's Category in the National Book Awards 2018! It's the sixth murder mystery for The Detective Society! This time, though, one of them is the suspect... 'Carries the Murder Most Unladylike mysteries into new heights . . . meticulously plotted and consistently delightful, and I can't recommend it enough' New Statesman 'Superb' Telegraph ----- When Hazel Wong's beloved grandfather passes away, Daisy Wells is all too happy to accompany her friend (and Detective Society Vice-President) to Hazel's family estate in beautiful, bustling Hong Kong. But when they arrive they discover something they didn't expect: there's a new member of the Wong family. Daisy and Hazel think baby Teddy is enough to deal with, but as always the girls are never far from a mystery. Tragedy strikes very close to home, and this time Hazel isn't just the detective. She's been framed for murder. The girls must work together like never before, confronting dangerous gangs, mysterious suspects and sinister private detectives to solve the murder and clear Hazel's name - before it's too late . . . 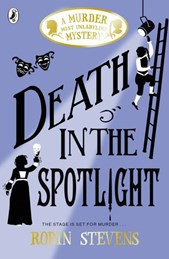 8. Death in the spotlight

Someone will take their final bow . . . The seventh thrilling Murder Most Unladylike mystery. Fresh from their adventure in Hong Kong, Hazel Wong and Daisy Wells are off to the Rue Theatre in London to face an entirely new challenge: acting. But the Detective Society is never far away from danger, and it's clear there's trouble afoot at the Rue. Jealousy, threats and horrible pranks quickly spiral out of control - and then a body is found. Now Hazel and Daisy must take centre stage and solve the crime . . . before the murderer strikes again.

*The number one bestseller!* The ninth and final novel in the bestselling, award-winning Murder Most Unladylike series. Daisy Wells and Hazel Wong are in Egypt, taking a cruise along the Nile. They are hoping to see some ancient temples and a mummy or two; what they get, instead, is murder. Also travelling on the SS Hatshepsut is a mysterious society called the Breath of Life: a group of genteel English ladies and gentlemen, who believe themselves to be reincarnations of the ancient pharaohs. Three days into the cruise their leader is found dead in her cabin, stabbed during the night. It soon becomes clear to Daisy and Hazel that the victim's timid daughter is being framed - and they begin to investigate their most difficult case yet. But there is danger all around, and only one of the Detective Society will make it home alive... A thrilling new short story collection in the number-one bestselling, award-winning Murder Most Unladylike series. Featuring six marvellous mini-mysteries, including four original, brand-new and never-seen-before stories: The Case of the Second Scream: set aboard the ship carrying Daisy and Hazel back from Hong Kong The Case of the Uninvited Guest: Uncle Felix and Aunt Lucy's wedding is the target for an unlikely threat The Hound of Weston School: the Junior Pinkertons investigate a mysterious arrival The Case of the Deadly Flat: introducing Hazel's little sister May, who's determined to be the greatest spy ever The Case of the Missing Treasure: the detectives crack fiendish codes to catch a daring thief who is targeting London's famous museums The Case of the Drowned Pearl: murder follows the Detective Society wherever they go, even on holiday... The perfect book for all Detective Society fans and avid readers of the Murder Most Unladylike series. Praise for Murder Most Unladylike 'Ripping good fun' The Times 'Plotting is what sets this book apart' Telegraph 'Enormous fun' Irish Times 'A skilful blend of golden era crime novel and boarding school romp . . . Top class' Financial Times 'I absolutely loved it' Susie Day