Playwright Seán O’Casey was fired about a week after he started working in Eason’s. In his 1942 memoir, Pictures in the Hallway, he provides a description of a typical frantic morning spent receiving the newspapers and getting them sorted for the bookstalls around the country. Initially, the day began at 6am for the wholesale news department but, over the next few years, as the demand for papers grew, the office began opening at 5am in 1872. This was a job for strong men and boys and plenty were let go when they proved unable to carry the heavy loads. O’Casey writes that the morning began with what appeared as organised chaos. A van delivered countless bundles of the Freeman Journal, The Irish Times and the Irish Independent prompting a sort of melée as an army of workers – men and boys – rushed out to grab them as fast as they could, some actually staggering with their load as they hurried to bring them inside and sort them out for their respective destinations.

Once his handcart was full, O’Casey took off to make his deliveries to the Belfast train at Amiens Street Station (now Connolly Station), amongst others. It was only on his return that he could have his breakfast, for which he received an allowance. One suspects he knew exactly what he was doing when he went to the cashier’s office to receive his first wages and refused to remove his cap. The sensitive cashier demanded that Charles Eason Jnr himself deal with such thuggery. When Mr Eason arrived on the scene, he wasted no time in taking sides, bellowing to the cashier to hand over O’Casey’s wages: ‘Let him have, let him have it, and go!’ Eason’s parting shot was ‘God bless us, how did such a person ever come to be employed!’

Eason’s, O’Connell Street, celebrated its 125th birthday in 2011, and writer Dermot Bolger wrote about its importance for Irish writers and customers alike, urging his readers against taking the shop for granted. It is more than a bookshop; it is a historical and social landmark, providing a meeting point for generations of couples whose dates began outside its doors.
Over a hundred and thirty years later, Eason’s is one of the stalwarts of O’Connell Street.

An extract from O’Connell Street The History and Life of Dublin’s Iconic Street by Nicola Pierce, published by The O’Brien Press. Out Now. 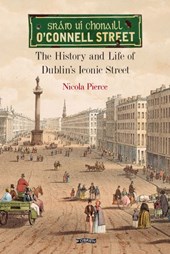