Sarah loves being a mother - it defines her. Every year she writes a birthday letter of love to her adored daughter, Izzy, now seven. And after she falls pregnant, she promises Izzy that the arrival of a baby brother will make their family complete. So when she collapses a few months later, the safe happy life Izzy knows is shattered. With Sarah's future, and the future of her pregnancy, in their hands, her husband and sister disagree fiercely about her treatment. The once close family starts to fall apart. The clock is ticking, and the doctors need a decision. Can those who love Sarah get beyond the fog of grief and anger to figure out what's for the best? Can they ever forgive each other for the decisions they make? Will Izzy lose everything she knows and loves?

Sinéad was born and raised in Dublin where she grew up surrounded by books. Her mother is an author of children’s books. This instilled her childhood dream that would one day become a reality, that she too write her own novel.

After university, she went on to live in Paris, followed by London. It was at the age of thirty, while working as a journalist in London that she began to write creatively in her spare time – after work, at lunch times … and, truth be told, during work hours.

After a couple of years brainstorming different ideas, Sinéad joined a creative writing group and began to write her debut novel 'The Baby Trail'. Having been translated into 25 languages, Sinead has went on to write 14 bestselling novels, including 'The Good Mother' and 'Ours Secrets and Lies'.

Browse and shop all of Sinéad Moriarty's books, including her latest release 'Seven Letters'. 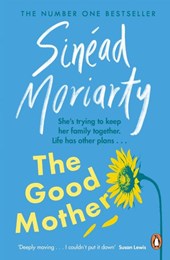