Irish Language Book of the Year: EL by Thaddeus Ó Buachalla
Poem of the Year: Wedding Dress by Martina Dalton
Short Story of the Year: This Small Giddy Life by Nuala O’Connor

TheJournal.ie Best Irish Published Book of the Year 2020.  Old Ireland in Colour brings to life the rich history of Ireland and the Irish through the colour restoration of these stunning images of all walks of Irish life throughout nineteenth and twentieth century. From the chaos of the Civil War to the simple beauty of the islands; from legendary revolutionaries to modest fisherfolk, every image has been exquisitely transformed and every page bursting with life. Using a combination of cutting-edge artificial intelligence technology and his own historical research, John Breslin has meticulously colourised these pictures with breath-taking attention to detail and authenticity. With over 250 photographs from all four provinces, and accompanied by fascinating captions by historian Sarah-Anne Buckley, Old Ireland in Colour breathes new life into the scenes we thought we knew, and brings our ancestors back to life before our eyes.

SPECSAVERS CHILDRENS BOOK OF THE YEAR (JUNIOR) 2020  There are so many people in this world - 7.53 billion to be exact. But there is only one of me and one of you. It's easy to think we are not good enough, or that our nose is too big, or wish we could be more like our friends. But the world would be different without you. You are enough just as you are.. .   Sometimes it can seem like the world isn't built for you or like you don't belong. But why should you change who you are for the sake of others? Sinéad Burke is an advocate, activist, teacher, writer and British vogue cover model. She also happens to be a little person at three and a half feet tall. Reflecting on her experiences growing up, Sinéad offers a heartfelt and inspiring guide to young readers on believing in themselves and finding comfort and pride in their own skin. From the power of being different and discovering things you love about yourself, to using your voice to be an ally and show friendship to others, it's time to break the mould and find your place in the world 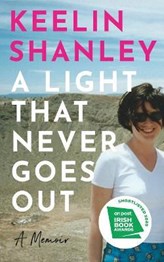 3. A light that never goes out

'Keelin's compelling story is as powerful as the woman she was.' Liz Nugent Joan Didion's The Year of Magical Thinking is a masterpiece. This ranks alongside. How can such a beautifully written, intimate, heartbreaking memoir be so uplifting?' Joe Duffy When journalist Keelin Shanley passed away in February aged 51, it was hard to grasp that someone so filled with life was gone. But a light so bright never really goes out, especially since, in her last few months, Keelin wrote a fantastic record of her life. Charting the twists and turns of both a remarkable career as an investigative journalist and a lengthy battle with cancer, in A Light That Never Goes Out Keelin reveals with real honesty what it's like to keep living your life and career - right up to becoming a co-anchor of RTÉ's Six One News - while dealing with the challenges of cancer treatment. Written with the help of Alison Walsh and completed posthumously by Keelin's husband Conor Ferguson, A Light That Never Goes Out is a remarkable story of courage and resilience and a memorable reflection on how to live well, no matter what you're facing.     'A stunning memoir - courageous, searingly honest, moving, funny, an incredible life story beautifully told.' Miriam O'Callaghan 'A beautiful love story, a behind-the-scenes career exposition and a candid telling of what it is like to live with, and die from, cancer. Heartbreakingly honest and heartachingly inspirational.' Caitrìona Perry, RTÉ Six One News Co-Presenter and Author 'I found myself moved again and again by how simply and truthfully Keelin talks about the experience of dying and I am in awe of the immense courage she showed in her final months.  A book which might have been bleak instead breathes with love - for her work, her colleagues, her friends and above all, her family.' Lenny Abrahamson, Director Normal People, Room 'A memoir that weaves the heart-breaking story of Keelin's terminal illness with joyous, insightful and frequently funny accounts from her life and career. A testament to the ultimate triumph of her unconquerable spirit.' Bryan Dobson 'This is such a beautiful book. It's oddly uplifting to read, even though at times I was jack-knived with sorrow. Keelin the most remarkable person - her positivity, her grace, her gratitude for her life would recalibrate anyone's attitude. A life-affirming read that will make every reader grateful for the people they love.' Marian Keyes   'I was deeply

Bookselling Ireland Cookbook of the Year 2020.  Even if you like to cook, getting dinner on the table Monday to Friday can be a daily drag. But not any longer! Neven Maguire’s fantastic new book will inspire you to create real, fast and delicious family food – all ready to eat in jig time. Chapters include ‘Low and Slow’ for when you have time to plan ahead, ‘Cupboard’s Bare’ for when you don’t; ‘One-Pan Dinners’ for quick and easy soups and stir fries and ‘Supermarket Sweep’ for when you can pick up an ingredient or two on your way home. This family-friendly, modern cookbook is packed with easy, everyday dinners to inspire you Monday to Friday!